I'm so proud of helping to spread the word of the first riot grrrl call up of Salvador, this is all about Na Lâmina da Faca's Collective. After Brazils' Ladyfest Íris said that she was really inspired, and now we all can see the good benefits of it.
They are asking for everybody that got good ideas to make together a D.I.Y festival made by woman. If you want to send your zine, band demo, art, patche, mixtapecd, you are welcome.

I'm posting in english because I havent seen an initiative like that in Brazil in a long, really long time (except Ladyfest Brazil). And people from everywhere has to know that are brazilian punk feminists doing things,selling records, starting a collective, making art and zines, trying to live their very best. Cause Brazil got that image of sexual tourism and dude hardcore. That is very real, but so are the girls that thinking and making things, we are everywhere. 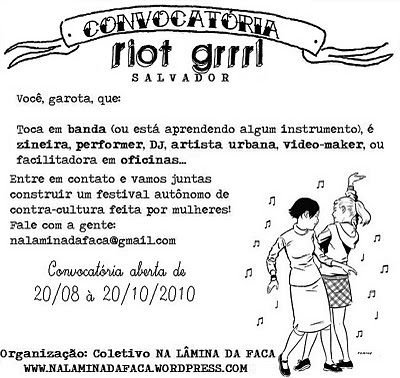 So, if you are from Chile (and I'm writing in english only because I can't wirte in spanish), Bolívia, Méximo, Toronto, France, Spain, New York, Belo Horizonte, Mooca, Malasia, Resende, Acre or whatever, if you have an idea and want to share you have to email the girls: nalaminadafaca@gmail.com . Send you ideas and stuff from: August 20 to October 20. The festival is going to be on Summer 2011. Summer 2011 we're waiting!